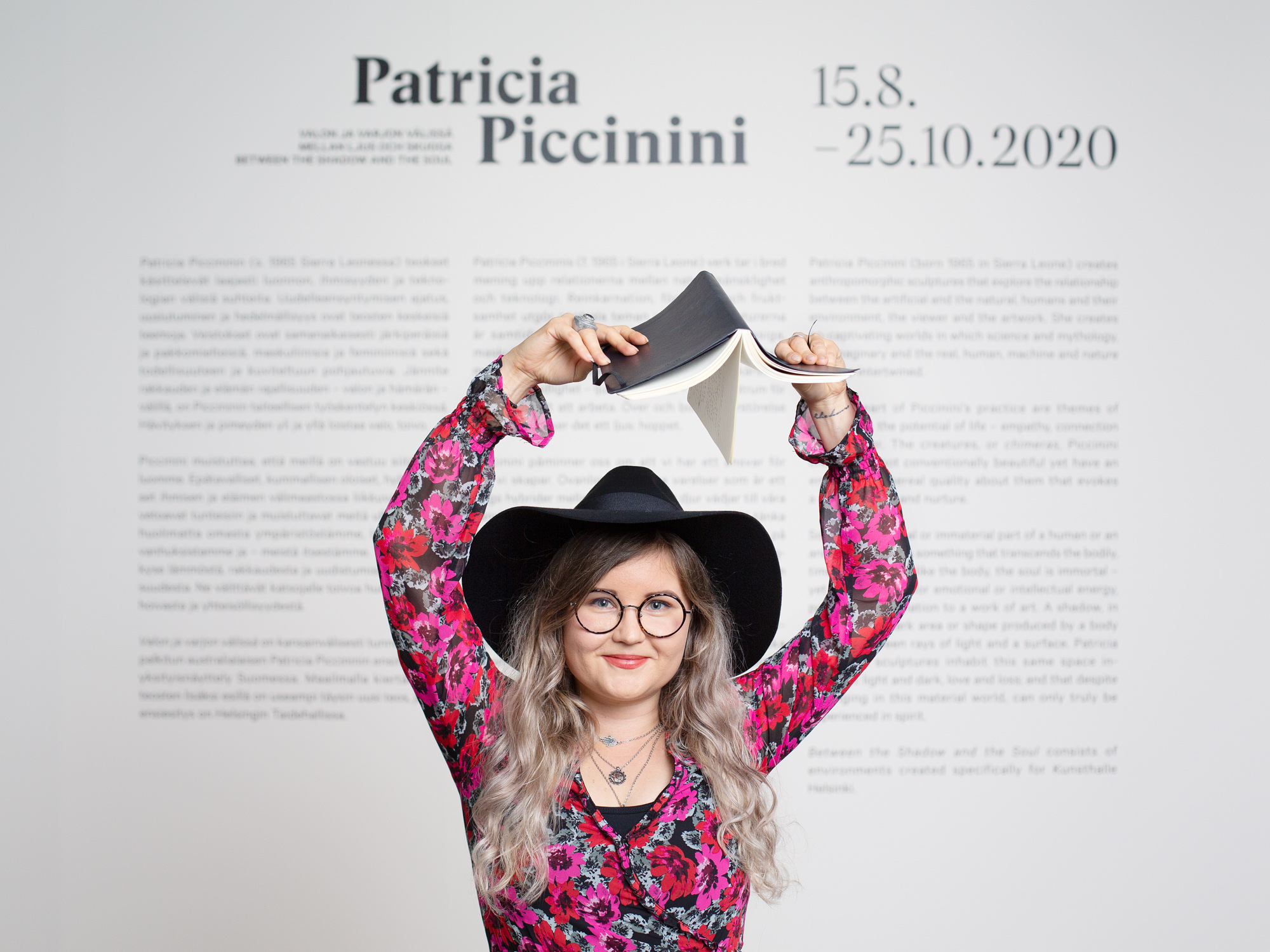 BETWEEN THE BODY, GENDER, TRUTH AND FANTASY  –  FEMINIST LECTURES AND WRITING EXERCISES

Independent writing exercises centring around Patricia Piccinini’s exhibition Between the Shadow and the Soul offer an opportunity to address the exhibition’s themes through the creative methods of word art and from a self-standing perspective of feminism.

The low-barrier writing exercises serve to deepen your interpretations of the exhibited works and to consider your own relationship with physicality, beauty ideals and drawing borders in questions about the body. You may question or even carnivalise collective views of reality that are considered self-evident.

The writing tasks do not require any kind of previous knowledge or expertise on visual art, creative writing or feminism. You only need the writing tools that you find most comfortable.

“I would like other people to create their own narratives about it”, Piccinini mentioned in a video interview about her work. This is your chance.

The writing exercises have been compiled by word art and bibliotherapy counsellor Jenni Hurmerinta (www.sanattu.fi).

Creative writing and the creative process necessitate letting go of reasoning and the censorship of the mind and language. An excellent tool in this sense is a poem based on the stream of consciousness. Its purpose is to diminish the writer’s control of their conscious self and even detach from it through the exercise. When we let consciousness flow freely, it can pick up meaningful items in our subconscious that we may otherwise not have noticed. Free-flow writing is not a narrative technique but rather a writing technique: the text produced does not need to be aesthetically representative or coherent.

Write a flow of thoughts based on the starting points presented below. Don’t censor your thinking or your emotions, allow even your absurd and inappropriate thoughts to flow on the paper (you do not need to share this text with anyone). If you are unable to formulate sentences, just list words as they appear in your head, and just make sure that your pen does not stop even for a moment!

Write a stream of consciousness on the following topics (spend a few minutes on each one):
1) By body and my body image…
2) My gender is defined by…
3) My definition of otherness is…
4) Belonging means…
5) The limits of my body and my mind…
6) Beauty is…

Read through the stream of consciousness that you just wrote. Circle or underline the words, sentences or phrases that most speak to you. Combine and compose a poem from the pieces you selected. You can conjugate the words you chose, complement the text as you wish, or adapt the task to your liking in any way.

2. Metamorphosis
Humans have always attempted to perceive their own position in the world by mirroring themselves through other people, things or phenomena. Universal and ageless myths and fiction writing are full of different “border crossings” and metamorphoses where the physical and mental limits of the human and the non-human are dissolved or put to test.

Different descriptions on the scale of humanity, stretching and questioning it have assumed the function of satirical critique in art. One of the best known metamorphoses in literature is Franz Kafka’s novella Metamorphosis from 1915. An example of a more recent metamorphosis is Marie Darrieussecq’s Pig Tales (1996) where a woman and her surroundings battle with their perceptions as the woman slowly transmutes into a pig.

•Metamorphosis is a perfect or partial transformation where an animal, being, thing or human changes its shape (by choice or involuntarily).
•Anthropomorphosis is the attribution of human features to other animals, inanimate objects or imagined settings.
•Dehumanisation is the rejection or denial of a person’s humanity.
•Animism is a belief that all beings and objects, such as natural elements and animals, have a soul.
•Personification is a metaphor whereby a non-human being, animal or object is seen to hold (mental and/or physical) human features.

Write a story from either starting point (a or b) or treat both ideas in the same story (a and b).
a) Write a story where a non-human thing, animal or phenomenon gains human and personal features.
b) Write a story where a person undergoes a certain metamorphosis where their humanity is questioned either internally or from the outside.
You can choose to write in an absurdist style or as so-called speculative fiction, meaning that you portray even the strangest occurrences in a way that they are “normal”. Or, you can create an alternative fantasy or science fiction reality for your story. You can also address your personal experiences through autofiction, or write a satire where you criticise certain grievances through a metaphor.

3. Biography
Pick one or more characters from the exhibition and write a life story for them. How was the character born, where have they lived and with whom, what sort of dreams does the character have and what are they afraid of, what do they eat, how do they get around, what sort of voice do they have, and so on.

4. Dialogue / Monologue
Pick two figures from the exhibition and write a dialogue for them. What are they discussing and with what kind of tone: do they have a conflict, or are they on the same side? If you wish, you can also write a dialogue between yourself and a character: what would you like to ask from the character, and what would you like to tell them?
Write a monologue for a certain character. You can address the text to others, for instance the exhibition visitors, or write an inner monologue that stays in the character’s head, following its stream of consciousness without intending to say anything aloud.