Kunsthalle Helsinki’s art exercises are aimed at school children and help them learn about the Kuntsi Collection exhibition and a number of contemporary artworks collected by Simo Kuntsi in the 1960s–70s. The proposed exercises can be done at home. Remember to clean up after your work!

Juhani Linnovaara’s works often feature different kinds of creatures. And they tend to be rather curious ones! In this work called Untitled I, Linnovaara produces a strong feeling of depth. The painting feels like it could suck you inside. A figure is holding the painting, hidden behind it. The figure’s feet, hands and skirt are peeking out from behind the painting. Or is the figure perhaps the same one we see in the painting?

ART EXERCISE 1
Juhani Linnovaara has titled his work Untitled I. Your task is to come up with a name for the creature in the painting. How does it move? Does it talk? What kind of voice does it have, and what does it like to discuss? The creature’s face is not visible. Perhaps it is shy? Make your own portrait of the creature in the technique of your choice, such as by drawing, painting, clipping images from newspapers and magazines and combining them using glue as a collage. You could even paint your face with facepaint or pull different faces and photograph yourself.

Kain Tapper’s artistic work in the 1970s-1980s often depicted simplified animal skulls. As a child, Tapper witnessed the death of a horse at his home farm in Saarijärvi. The incident made such an impression on him that it is strongly visible in his art. The sculpture of a skull has two different pedestals; at Kunsthalle Helsinki it is presented on the wooden version. The sculpture has been polished shiny yet some marks have been carved on it. According to the artist’s brother, these tell us that Tapper never got over the tragic death of his horse. 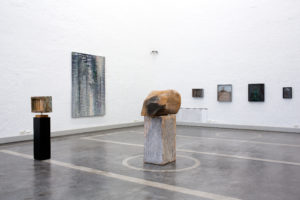 ART EXERCISE 2
The Cranium resembles an animal skull. Can you find something in your vicinity that resembles a skull, such as a piece of wood, rock or cloud? What kind of animal might have they belonged to? Fold and form a blanket at home into the shape of a skull. Take a picture of your work.

A child is sitting wearing headphones on a high chair. The chair has been given to the child by the state. The chair is too small for the child. Both the chair and the child are numbered. Rauni Liukko’s sculpture of a child comments on the defects of the world. This child seems to come from a world that is rarely considered a child’s world. The child is sculpted from styrofoam and finished with plaster. How would you describe the child’s mealtime? Why are the child’s ears covered with headphones? 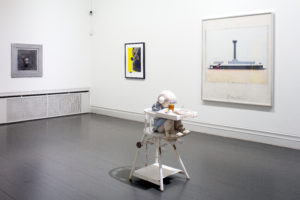 ART EXERCISE 3
Document closely a family meal. You will need a pen and paper. Describe your family members, their expressions, the sounds in the environment, and the taste and smell of the food. Write down bits of the discussion at the table. At the end of the meal, read out your description to your family. Did your writing turn into a funny story or perhaps a beautiful poem? Remember to ask for permission from your parents to do this task. Remember to also eat your meal while doing your writing.

Kimmo Kaivanto is known for nature themes and his use of ultramarine blue. Kaivanto’s painting shows a sun just about to set beyond the horizon. It glows in an orange shade on a blue background. 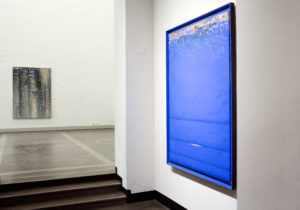 Reino Hietanen’s works tend not be figurative, that is, they tend not to depict the real world. The work City however clearly shows an image of an urban landscape with an apartment building full of windows. Can you spot some details? What is happening in the rooms? 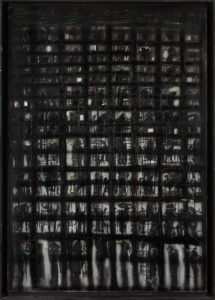 ART EXERCISE 5
Bring the city or landscape visible from your home window indoors. Is there a room at home that you can easily dim? Cover the window with, for example, black rubbish bags with tape to block light entering the room. Fill in any holes where you still see some light. Make a 3cm diameter hole in the bag. If you need to, you can make the hole bigger or also smaller using some black tape. Sit still and look into the opposite wall. Let the magic happen.