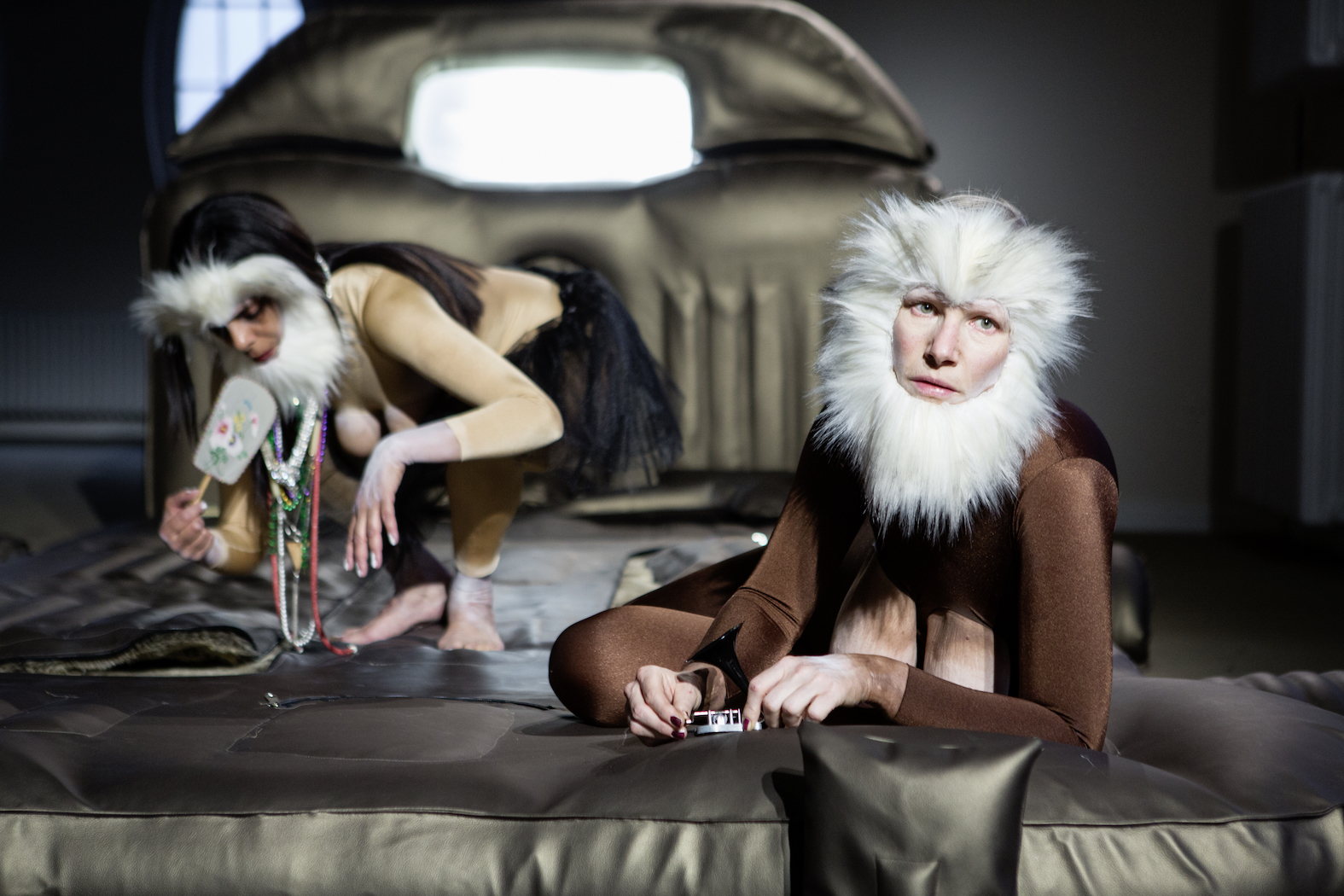 In Consul and Meshie by choreographers Antonia Baehr and Latifa Laâbissi the figures of two chimpanzees occupy a base camp that resembles the inside of a limousine. The installation designed by visual artist and set designer Nadia Lauro forms its own autonomous artwork, that the two furry, promiscuous, impertinent monkeys occupy for the duration of the performance. The spectators are invited to be a part of the landscape, sitting or lying down on the floor, next to the vehicle that spreads into the space.

Consul and Meshie are actual historically documented monkeys that lived in the beginning of the 20th century and that were raised like human beings. Monkeys, and in particular apes, are considered “almost human” animals, and this “almost” has made them a surface for projecting that which is considered human by other humans. By using their figures, Consul and Meshiedoes not strive to be a biography of these two apes. Instead, their figures are hybrid and queer composites blended with layers of poetic, anthropological and political references that create their own story. The work explores the relationship between nature and culture, the idea of domestication, and questions of marginality. Donna Haraway’s research on the relationship between feminism and the figure of the monkey or gorilla inspired the work. “Consul Baehr” and “Meshie Laâbissi” represent hybrid figures examining the violence of assignations and stirring up chaos in the categories of nature vs. culture, man vs. woman, and the self vs. others.

Antonia Baehr
Performer, filmmaker, visual artist, and choreographer Antonia Baehr is interested in the opposition between humans and animals but also in elements in representational space. As a choreographer she moves in the realms of everyday fiction and theatre, working at the edges of that which defines us as human beings – placing us via a voluptuous see-saw in critical positions. Besides choreographic elements, Baehr is interested in the rules and laws which a society assigns to bodies, to make them recognizable and comprehensible. Baehr has collaborated with multiple artists, such as Neo Hülcker, Pauline Boudry and Renate Lorenz, and with many others who are interested in the changing of roles: from project to project, each artist is alternately the host or the guest. LAUGH by Antonia Baehr was part of the programme of Moving in November 2009.

Latifa Laâbissi
Mixing genres, redefining formats, the creations of Latifa Laâbissi bring on stage a special kind of off-camera layering of figures and voices. The use of voice and the face as vehicles for certain states became irrevocably entwined with the danced act in Self-portrait camouflage (2006) and Loredreamsong (2010). Then, continuing her examination of the theme of the archive, she created Écran somnambuleand La part du rite (2012), based on German dance of the 20s. Pourvu qu’on ait l’ivresse (2016), cosigned with the set designer Nadia Lauro, consisted of visions, landscapes, and images in which we see excess, the monstrous, the beautiful, the random, the comic, and fear. Since 2011, Latifa Laâbissi has been the Artistic Director of Extension Sauvage, an artistic and pedagogical program located in rural areas of Brittany. In 2016, a monographic book about her whole work was published at Les Laboratoires d’Aubervilliers and Les presses du réel. In 2018, she created Consul & Meshiewith Antonia Baehr in a visual installation by Nadia Lauro. They also gathered together in 2019 for the video Moving Backwards by the duo Pauline Boudry and Renate Lorenz, presented in the Swiss Pavillon of the 58th Venice Biennale. In Summer 2019, the Festival de Marseille welcomed the première of her creation White Dog, a choreography for four performers. Until 2019, she has been an Associate Artist at the CCN2 – Centre chorégraphique national in Grenoble and at the Triangle – scène conventionnée danse à Rennes.